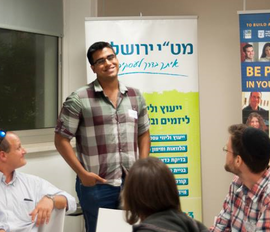 Tell us a about yourself. Where did you come from?

I was born in Belem, the capital of the state of Para in Brazil, to a Jewish family with two older brothers. Zionism and Jewish identity were always very strong values at home, and my entire life I heard my parents saying they wish to come to Israel.


Jews in the Amazon- how cool!

Yes, the community in the Amazon is one of the oldest in America.  Sephardic Jews came from Morocco at the beginning of the 19th century. The community in the Amazon was very important at its time and at its peak reached about 1000 families. Most Jews worked as traders of natural rubber, but with the development of the synthetic rubber many Jews moved to different centers in Brazil, such as Sao Paulo and Rio de Janeiro – and, of course, to Israel. The Jewish community still exists in Belem; there are about 400 families.


How did you get to the Mechina?

When I was seven my parents decided that it was time, and my whole family made Aliya. Even though there was great joy in our family as new Olim, it was very difficult for my parents to run their business in Brazil from Israel. After 4 years they had no choice but to return to Brazil. Both my brothers were enlisted in the IDF and so they stayed in Israel. But I had no choice and I had to go back with my parents (I was eleven at the time). When I reached eighteen I told my parents that I want to go back to Israel and join the IDF, and so I did. I enlisted to Golani and after I finished my service as a lone soldier I came to the Mechina.


How was your experience in the Mechina?

The truth is that my experience at the Mechina was perfect! I had the opportunity to polish my Hebrew, to learn with teachers who really did everything in order for me to understand and succeed, experience the academic environment of Mount Scopus, and meet more young people who, like me, made Aliya and want to start their life here as students and become successful citizens. Most of my friends here in Israel I met in the Mechina and I consider them friends for life! When we go out no one understands how people from such different places can meet and just be a group of good friends.


What about the future?