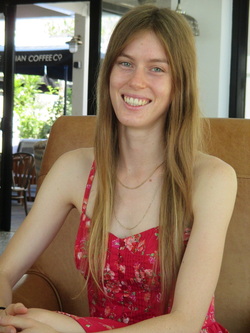 
Where were you born, and what was life like abroad?

I grew up in a Moshav in Israel, and finished junior high school there. After that, I moved with my family to Cyprus, because of my dad's job. I studied for three years in the British high school, and then I realized my dream. I wanted to play basketball, so I flew to the United States, studied for a year in high school there, and played basketball. Afterwards, I decided that I want to go back to Israel and enlist in the IDF, and after I was released, I came to the Mechina.


What made you want to make Aliyah? What was the Aliyah process like?

When I finished the year in the United States, even though I had already been accepted to university there, I felt it would be difficult and lonely to stay far away. I really missed my friends and family in Israel, and I wanted to serve in the IDF like my father, grandfather, and brothers, who have all served. I saw myself living in Israel in the future, and I knew that if I started studying in the U.S, it'd be even harder to go back to Israel. I wanted to be here.

The Aliyah process wasn't easy, because even though I grew up here, I still don't feel like I fit in sometimes. For instance, friends with whom I grew up – they all have experiences and stories from high school and other places I'm not a part of. Now, too, in University, people talk about their matriculation exams, and I have no idea what they're talking about, it's like listening to a conversation in Chinese.


How did you feel in the Mechina? What experiences do you remember?

When I first started studying in the Mechina, I didn't know what to expect. Pretty quickly I got a hold of myself and realized that I have to really study hard in order to succeed. The Mechina gives you all of the support you need in order to excel, whether it's the teachers who give extra time to meet with them, or the academic marathons that help us study for finals, or the counselors who give you an extra push forward when you need it. If you are prepared to work hard and put your best effort forth, everyone will help you achieve your desired results.


What are your plans now?

I got accepted to Med School and will start this year at the Hebrew University in Jerusalem. Right now, that is the most central part of my life. I still have a little bit of vacation before school starts, so I'll try to visit my grandparents more often. They are getting older and need some help. I'm also going to try to travel a little bit, and spend some time at home before I won't have any time there, once school starts!