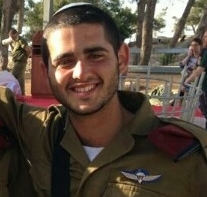 Gabriel studied at the Mechina in 2012-3, and as soon as he graduated he enlisted to the IDF.
During Operation "Protective Edge," Gabriel fought in the Gaza Strip with his unit. Here he recounts his experiences.

My name is Gabriel Lasry. I made Aliyah from Spain two years ago, straight into the Mechina Preparatory Program for Olim at the Hebrew University.
I had a perfect year: I made friends, learned Hebrew, and enjoyed countless positive experiences.

When the year ended, I decided I wanted to enlist to the IDF. I enlisted in November, 2013, to the paratrooper unit.

At the end of our training, after eight months, we were told we were going to fight in the Gaza Strip as a result of the increasing number of rockets that were fired towards Israeli civilians.

A few hours before we entered Gaza, all of the combat soldiers danced in a circle and sang songs about Israel and the Jewish people, and then I understood what the Rabbi meant:
When we think about our Jewish history, everything we went through together, and the miracle that we are here, in Israel, together, everything else is insignificant. Nothing else matters, and the fears dissipate.

We finished the fighting, and most of us left unharmed.
Now I'm in commander training, and in a few months I'll be a commander!